Reunion alert! The cast of Disney Channel’s Austin & Ally got together and E! News was there for the virtual hang.

In the exclusive video above, E!’s Lilliana Vazquez chats with Ross Lynch (Austin), Laura Marano (Ally), Calum Worthy (Dez) and Raini Rodriguez (Trish) about their time on the series that ran from 2011-2016.

Austin & Ally premiered in December 2011 and followed the unlikely friendship between two opposites—Austin, the extrovert musician, and Ally, the shy songwriter—and their best friends Trish and Dez. Naturally, the reunion kicked off with the Austin & Ally clap.

During the digital sit down, the cast revealed their early memories of the show and what it was like filming it before the rise of Snapchat and TikTok. 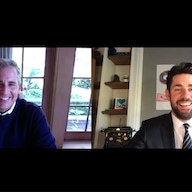