During Tuesday’s episode of his podcast Viall Files, the former Bachelor threw some shade at Madison Prewett, speculating that there’s more to her than meets the eye.

While discussing Prewett’s recent claims that Peter Weber wanted to rekindle their relationship days before sparking romance rumors with Kelley Flanagan, Viall shared that she has a reputation of being “a liar.” He also alleged that fan theories calling out Prewett for running her own fan account, which fans believe she used to depict herself in a positive light, are true.

“We also know Madison to be a little bit of a liar,” he said. “People want to forget —I know Madison wants to forget it—but her Instagram…It’s a fact she did that. And, listen, it is silly and trivial and there’s a logical explanation for it that, you know, she wanted people to like her. It’s a totally relatable thing.” 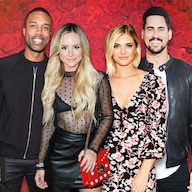