Carissa Culiner stopped by E!’s Daily Pop on Wednesday afternoon and she had a special surprise for E! peers Erin Lim and Morgan Stewart: her newborn daughter, Zoey Grace Culiner!

Carissa gave birth to Zoey—her second child with husband Shanon Culiner—on April 28 in Los Angeles. Until today, the couple had only shared a couple of photos of Zoey; however, the adorable newborn was on full display as Carissa video conferenced with the E! ladies from home.

She also revealed more about the actual birth process! Carissa had previously mentioned that she used a method Kourtney Kardashian has discussed, where a mom actually pulls her child out during labor.

“So this was always kind of my dream,” Carissa said on Daily Pop. “Ever since I heard about the idea, and the doctor said, ‘Okay, if it works out, I’ll let you do it. But no promises, ’cause anything could happen.’ I said, ‘Okay!’ I won’t get my hopes up or anything.'” 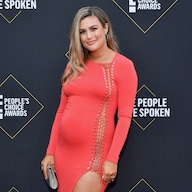