Monica Geller lives on in Courteney Cox! In the exclusive sneak peek from Celebrity Escape Room, NBC’s new special kicking off Red Nose Day 2020, Cox and her teammates Lisa Kudrow, Adam Scott and Ben Stiller are, well, trying to escape the room, and Cox begins shouting at Kudrow, who’s on the wrong color, like her iconic Friends character.

“I see a little bit of Monica coming out in Courteney and I like it,” Jack Black, Celebrity Escape Room executive producer and “Game Master,” says in the exclusive sneak peek.

Kudrow wasn’t on the only one on the wrong color, Stiller was in her spot.

“Happily, this is not an IQ test,” Scott, who recently reunited with his Parks and Recreation costars for a special episode designed to raise funds for Feeding America, says in the special preview. “But we should be embarrassed.” 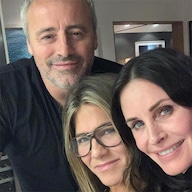