On Tuesday, David Beckham couldn’t help but tease his wife Victoria Beckham over her cameo in their son Cruz Beckham‘s Instagram post.

Donning matching white robes, the Spice Girls alum and the 15-year-old can be seen posing for a mirror selfie and flashing the camera a pair of big smiles, which is a big deal for Victoria, who rarely shows off her pearly whites in pictures. So much so, that Cruz captioned the mother-son snap: “Apparently my mum does smile.”

Surprised by the fashion designer’s expression, David trolled her in the comments with an epic Friends reference. “How white are mums @victoriabeckham teeth ? it’s Ross from friends.” Fans of the ‘90s sitcom know that the soccer pro was referring to the episode where Ross (David Schwimmer) had his teeth whitened ahead of an important date, but of course, ended up with a blinding white smile after a hilarious mishap. 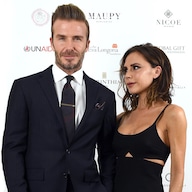