This family dynasty just added one more to the family tree!

Earlier this week, Duck Dynasty star Phil Robertson recently found out that he fathered a child from a past affair, who is named Phyliss.

As fans of the famous family know, the patriarch and his longtime wife Kay Robertson are parents to four kids (who are all adults): Jep Robertson (42), Willie Robertson (48), Jase Robertson (50) and Alan Robertson (55).

Now, Phil has welcomed his adult daughter to his… well, dynasty! And the reality TV personality couldn’t be happier over the news.

“It’s a pretty cool explanation of redemption, reconciliation, love,” Phil shared in a video uploaded on his YouTube channel. “As it turns out, 45 years, you have a daughter that you don’t know about, and she has a father she doesn’t know about.”

He added, “45 years—that doesn’t sound like very long, but you say, that’s a while. So finally, after all those years, we come together.” 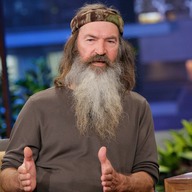