Simone Johnson is the latest in a long line of wrestlers to step foot in the ring.

And her father Dwayne Johnson couldn’t be more thrilled she’s joining the family business. Last night, the wrestler-turned-actor formerly known as The Rock joined The Tonight Show Starring Jimmy Fallon, conferencing in from his home in Georgia.

“I want to say congrats to your daughter Simone, by the way, who is now going to be in the WWE!” Jimmy Fallon started off.

“She signed her contract with the WWE, it just blows my mind,” 48-year-old Johnson said. “First of all, I mean, what an honor that my daughter wants to follow in my footsteps.”

He continued, in full proud dad mode: “But more importantly—follow in my footsteps sounds cliché—but she actually wants to blaze her own path, which is just so important. She wound up being the youngest signee in the history of the company, by the way.” 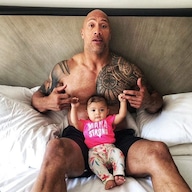