Nina Parker is speaking out against the murder of George Floyd—a black Minnesota man who died after pleading “I can’t breathe” as a white police officer pressed his knee into his neck—and she wants other people to do the same.

On Friday’s Daily Pop, the E! host explained to Erin Lim and Scott Tweedie that police brutality “is not anything that is new to me,” nor is “the strange relationship that I feel like a lot of black people have with law enforcement.”

“I think that goes back for many, many years. I think now it’s really starting to affect people because there’s social media and there’s video. Because I think for so many years there were people who wanted to deny that anything was even happening,” Nina related. “And so I feel like the fact that this is documented so much more frequently now is giving people more of an inside look as to what people have been saying for many, many decades.”

Bystander footage of Floyd’s murder is what initially sparked nationwide outrage and protests while many have taken to social media to condemn the incident as well as the larger factors at play like police brutality and institutionalized racism. 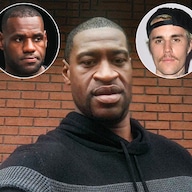