For all those still confused as to how to pronounce Grimes and Elon Musk‘s child’s name, there is much reason to be relieved.

On Monday May 4, the 32-year-old singer and 48-year-old Tesla leader welcomed their baby into the world, explaining via Twitter that their son’s name was X Æ A-12 Musk.

But in the time since, the couple had to slightly modify the spelling of their child’s name in order to meet California’s legal guidelines, which only permit letters from the English alphabet. Switching over to roman numerals, the parents agreed to spell his name, X Æ A-Xii.

In a new profile by Bloomberg, the “Genesis” singer revealed her nickname for her newborn, “Little X.” The cute moniker is much simpler than his birth name, which Grimes and Musk have broken down.

“X, the unknown variable,” Grimes explained on Twitter. “Æ, my elven spelling of Ai (love &/or Artificial intelligence) A-12 = precursor to SR-17 (our favorite aircraft). No weapons, no defenses, just speed. Great in battle, but non-violent.”

Grimes continued, “A=Archangel, my favorite song” with an accompanying a rat and sword emoji. “Metal rat.”

Musk later clarified that she was actually referencing an SR-71, a Lockheed aircraft operated by NASA and the United States Air Force. 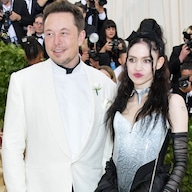