It may be getting warmer outside, but it’s getting shady in Bachelor Nation.

On the heels of new romance rumors swirling around former Bachelor contestant Hannah Ann Sluss and Pittsburgh Steelers quarterback Mason Rudolph, Peter Weber‘s ex-fiancée seemingly weighed in on the matter with a not-so-subtle side of shade.

On Thursday, TMZ published photos of Sluss and Rudolph walking together on a coffee run, alleged to be the third joint sighting of them in recent days. Naturally, the snaps spurred rumors of a budding romance, which Sluss fanned when she briefly “liked” an Instagram comment on the photo of them that read, “THE UPGRADE OF THE CENTURY.”

For whatever reason, Sluss later “unliked” the comment after some took notice.

While appearing on an episode of Off the Vine With Kaitlyn Bristowe earlier this month, Sluss said she had a “FaceTime date” and coincidentally said that someone dropped off coffee. 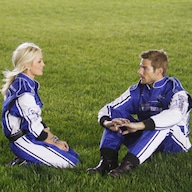