Imitation is the sincerest form of flattery and something tells us Joe Exotic is loving all of the celebrity Tiger King cos-play going down on social media these days.

While Kate McKinnon is already set to star as Carole Baskin in a scripted TV series about the pair’s epic feud, that hasn’t stopped other celebs from dressing up as the divisive Big Cat Rescue owner on social media since Tiger King debuted on March 20.

But with the role of Joe Exotic in the UCP series still up for grabs, a lot of actors are seemingly throwing their names in the ring to portray the eccentric zoo operator, who had multiple husbands, a mullet and is currently in jail serving his 22-year sentence.

“If I don’t get cast as Joe Exotic in the eventual biopic, Hollywood is broken,” Dax Shepard tweeted, but stars like Rob Lowe, Jared Leto and more have gone as far as to dress as Joe, while Thomas Lennon jokingly (but maybe seriously) auditioned in character during an appearance on The Late Show With Stephen Colbert. 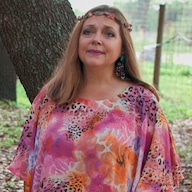 Tiger King Stars: Where Are They Now?