From idol to friend.

On Tuesday, Avril Lavigne caught up with E! News co-host Scott Tweedie for the latter’s Instagram series, HappE! Hour. During this chat, the “Head Above Water” artist opened up about her friendship with 18-year-old chart topper Billie Eilish.

As E! readers surely know, back in July 2019, the edgy pop veteran attended the “Bad Guy” artist‘s concert at the Greek Theatre in Los Angeles, Calif. It was during this concert that the two artists had a chance to meet and talk. This meeting clearly meant the world to Billie, who later shared a snap from the encounter and wrote, “Thank you for making me what I am.”

However, from what the “Sk8er Boi” rocker exclusively dished to Scott, it’s clear that Avril is equally a fan of Billie’s.

“Her performance was amazing, she was super sweet and she said a lot of kind things about me in her interviews, that she listened to my music and stuff growing up, so it was really cool meeting her,” the 35-year-old singer-songwriter relayed. “She’s awesome, she’s super talented, she’s a sweetheart. Love her!” 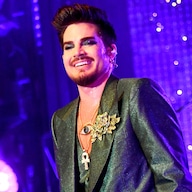