The role that made Kate Bosworth a breakout star was one she almost didn’t get.

Of all the films you could associate the longtime actress with, it’s likely Blue Crush, the 2002 surf movie that ultimately became a box office hit and officially put Bosworth on the Hollywood map. However, as she recently revealed on Sophia Bush‘s podcast, Work in Progress, it was a role that nearly went to someone else.

“Six months of living in LA, this script called Blue Crush came to me and I had never touched a surfboard in my life, but I knew that girl through and through,” Bosworth recalled. “I knew what it was like to love something so deeply and to want something so badly and to have the kind of grit and determination that this girl had and the vulnerability and the fear and the doubt and the self-doubt—all the things that I was experiencing in that moment was crossing over with this character.” At the time, she was an aspiring young actress auditioning daily with only a handful of acting credits to her name.

“Every cell in my body said you are this person, you’re gonna get this role,” she said. 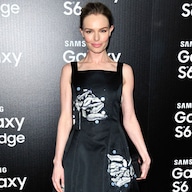