Jaime King took to Twitter on Tuesday to share that she’d been arrested after participating in a peaceful protest in Los Angeles. “Writing in handcuffs in back of bus,” the 41-year-old actress tweeted. “EVERYONE WAS PEACEFUL—Jaime and the rest of my sisters on this bus. 77th precinct.”

King then detailed the experience.

“Currently still on the bus for over 4 hours,” she continued. “Took us from 77th precinct to San Pedro. Women w/ no access to vital meds, bathrooms, bleeding through their pants. They are laughing at us. #BlackLivesMattter.”

Earlier in the day, King was protesting outside of the home of Los Angeles mayor Eric Garcetti. She wore a shirt that read “I am a voter,” as well as a mask amid the global coronavirus pandemic. King was one of thousands of protesters to attend the rally and call for justice. 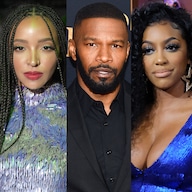