Jake Gyllenhaal is ready for fatherhood.

Speaking with British Vogue, the actor opened up about his dreams of starting a family, revealing that he sees kids in his future.

“Yes, of course I do. I definitely do,” his response began, noting that his ideals on fatherhood are mirrored in his character from the play Sunday in the Park with George. “The act of making love to make a child…the real thing is life. You get to the end of the show and that’s what it’s about. Children. Children and art.” This isn’t the first time that Gyllenhaal has expressed interest in being a dad. In a July interview with Sunday TODAY’s, he said, “I do hope to be a father one day.”

Still discussing children and art with the U.K. outlet, Gyllenhaal also revealed that he’s “lightened up” in recent years and has been focusing his energy on his relationships—particularly with his girlfriend Jeanne Cadieu, who he has been romantically linked to since December. 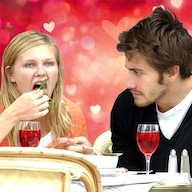