The death of George Floyd at the hands of the Minneapolis Police Department has sparked outrage across America — and some celebrities are taking to the streets to participate in protest.

At a Minneapolis press conference yesterday, actor Jamie Foxx spoke to the crowd.

“I think that what you saw on television, to watch this man plead for his life,” Foxx said. “As I sit with my two daughters, my nephews … what it does is, it over-complicates everything as a black man trying to tell his son or his daughter how to function in life. Even the things that we’ve taught them don’t seem to work.”

Foxx went on to compare the disparity in the use of force used to arrest white people and black people. He referenced the non-violent arrest of Dylann Roof, who killed nine members of a black church in 2015.

The actor also shared a 22-minute video from a peaceful protest to his Instagram, with the caption: “George Floyd, can not describe how much pain… power and love is here in Minneapolis… change Gon come… #changecourse.”

Nick Cannon was also on location in Minneapolis yesterday, also sharing the moment on Instagram, where he’s seen holding a poster that reads “Justice for Floyd.”

Although the officer who was filmed kneeling on Floyd’s neck, Derek Chavin, has been fired, arrested and charged with murder, many continue to protest for the arrest of the three other involved officers — and the history of racial injustice in America. 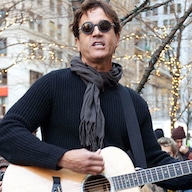