Jay Cutler and Kristin Cavallari are keeping things cordial on social media, despite their contentious divorce. The couple, who had been together for 10 years, announced they were going their separate ways in late April.

However, on Mother’s Day, the two appeared to be on good terms. Case in point: the retired NFL star gave a sweet shout-out to the Uncommon James founder on Instagram.

“Happy Mother’s day to all the moms,” he captioned his post, alongside a photo of his children soaking up the beachy sand with Kristin. “These 3 little ones picked a good one.”

The fashion mogul responded with a red heart emoji.

Moreover, Kristin also gushed over her little nuggets on Instagram.

“Everything made sense once I become a mom to these 3. Being their mom is the greatest gift,” she expressed. “Happy Mother’s Day to all of the moms out there.” 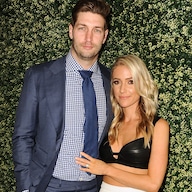