Joanna Gaines and Chip Gaines have been married for almost two decades. However, the 42-year-old designer didn’t exactly fall head over heels with the 45-year-old house flipper when they first met.

“It wasn’t love at first sight for Chip and me,” the Fixer Upper star wrote in a note titled “Slow Yes.” “For one thing, I was typically attracted to guys who were more on the quiet side. Based on our first date, it was clear that Chip was anything but quiet. He was all over the place, talking about the businesses he’d started, and these ideas he had, and how he was buying up little houses and flipping them, and I was wondering if he was just a bit crazy. In my mind, I somewhat instinctively checked his penchant for risk and chatty nature as two reasons we probably wouldn’t go on a second date.” 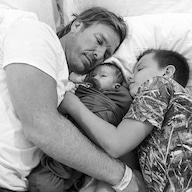