Jojo Siwa is turning 17 with a bang.

Ahead of her milestone birthday, the famous YouTube star decided to change things up and ditch her signature ponytail, which she documented on TikTok on Monday.

Standing in front of the mirror and donning her go-to ponytail, hair bow and a bedazzled jacket as the song “Wipe It Down” played, Siwa can be seen giving her vanity a good clean with some Windex and a rag. Then as she continued to scrub, she switched out of her sequined ensemble to reveal a more laidback look, which included letting down her long blonde strands.

“IT’S MY BIRTHDAY TOMORROW,” she captioned the video. Fans of the viral sensation know that this isn’t the first time that she’s changed up her look before. Back in April, she shared a video of herself embracing her natural curls on TikTok after a fan asked her to “dress normal for a day.” 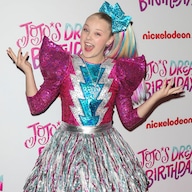