Julianna Margulies went for a 10 cc of nostalgia to wish longtime pal and former costar George Clooney a happy birthday.

Margulies, who is new to the social media platform, went to Instagram to wish Clooney a happy birthday with a photo from her final series regular appearance on ER. Clooney and Margulies, both original cast members on the long-running medical drama, played star-crossed lovers Doug Ross and Carol Hathaway on ER. Clooney left in season five, Margulies followed at the end of season six when her character left Chicago to reunite with Doug in Seattle. Clooney’s appearance was kept a secret from pretty much everyone. 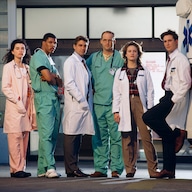 ER: Where Are They Now?