On Monday, it was revealed that Prince William and Kate Middleton had a different name for their eldest son picked out before his arrival in 2013. According to royal expert Katie Nicholl, the Duke and Duchess of Cambridge were planning on giving the young royal the name Alexander instead of George.

“Courtiers insisted the pair had not found out the sex of their unborn baby, and friends close to the couple claim William wanted a surprise,” the reporter wrote. “Although Kate apparently suspected it was a boy and had set her heart on the name Alexander, they had not yet decided what to call their firstborn.”

Royal enthusiasts know that Alexander ended up being one of the 6-year-old’s middle names and that William and Kate decided to pay tribute to Queen Elizabeth II‘s father King George VI with their firstborn’s now famous moniker His Royal Highness Prince George Alexander Louis of Cambridge. 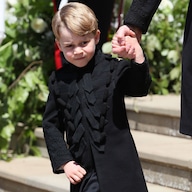