Khloe Kardashian is not pregnant.

The Keeping Up With the Kardashian star took to social media on Wednesday to shut down speculation that she’s expecting a second child with her ex, Tristan Thompson.

“I don’t go on social platforms much these days AND this is one of the main reasons as to why I stay away. The sick and hurtful things people say. I am disgusted by so many things I am seeing,” Khloe tweeted on Wednesday. “SMH people swear they know everything about me. Including my uterus. Sick.”

“The nasty things you’re saying about me over A RUMOR!” Khloe continued. “I have seen so many hurtful/despicable stories and tweets about me over a false story. And if it were true…. it’s MY LIFE, NOT YOURS.”

Rumors started flying on social media after a report claimed Khloe and Tristan were expecting a second baby. Khloe’s name was even trending on Twitter for most of Wednesday. 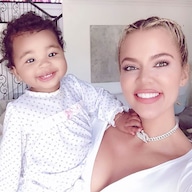