Kylie Jenner is at it again.

On Tuesday, the Kylie Cosmetics founder channeled her famous family once again for a Keeping Up With the Kardashians­­-inspired TikTok video. Throwing it back to a hilarious exchange between her sisters Khloe Kardashian and Kourtney Kardashian, Kylie served up some nostalgia by reenacting their conversation about the POOSH founder’s lack of WiFi.

“Kourtney, what the f–k is up with your WiFi?” Khloe said in the famous scene, which Kylie recited perfectly as she held up her phone. “You have this big ass house and you can’t afford a WiFi box out here?” Playing the role of Kourtney was Kylie’s BFF Anastasia Karanikolaou, who was lounging on a couch and replied, “It’s not about affording. It’s about radiation.”

Frustrated, Khloe fired back, “You’re gonna die anyway. You understand that, right?” Leaving her sister with an iconic piece of advice, she continued, “Die with a good Snapchat going through. What the f–k?” 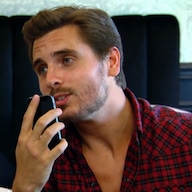 Best Keeping Up With the Kardashians Moments Ever!