When you tune in to I Know This Much Is True on HBO this Sunday, no need to adjust your sets: There really are two Mark Ruffalos on your screen.

In the limited series based on the best-selling novel of the same name by Wally Lamb written and directed by Blue Valentine auteur Derek Cianfrance, the Avengers star takes on the intense task of playing identical twins Dominick and Thomas Birdsey in what the network describes as “a family saga that follows their parallel lives in an epic story of betrayal, sacrifice and forgiveness.

While playing two characters in one project sounds difficult enough, Ruffalo’s job here also requires him to sensitively tackle the portrayal of severe mental illness as Thomas suffers from paranoid schizophrenia. No easy feat, but if he pulls it off, prepare to hear his name come this year’s Emmys. (If they even happen, that is.) 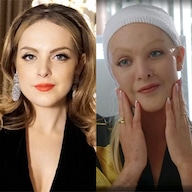 Double Duty: When Actors Take on Multiple Roles on the Same Show