You don’t have to wait until tonight to see the first scene of RuPaul’s Secret Celebrity Drag Race.

The sneak peek below features Bob, Trixie and Monét meeting the first crop of secret stars. There’s an actor who describes himself as an author and activist as well. “I feel like I’ve been waiting my entire life to be here,” the mystery star says. 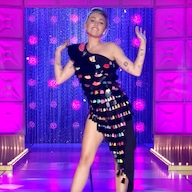