Naomi Campbell is 50 and fabulous.

During an exclusive chat with Daily Pop co-host Morgan Stewart, the famed supermodel reflected on her milestone birthday. As E! readers surely know, last week (May 22, to be exact), Naomi turned 50 years old.

So, how did she celebrate? According to the British-born businesswoman, her birthday was a “surreal and serene day.”

As the industry veteran is practicing social distancing amid the coronavirus pandemic, she revealed she celebrated her name day with an intimate group of friends. In fact, per Naomi, there were only “four of us.”

Although Naomi said she’s been doing fine in self-isolation, she did reveal one struggle she faced. Namely, she’s had to learn more about technology, especially for her Essence cover.

Earlier in May, Naomi shot a cover for the popular magazine using an iPhone. Since a magazine cover typically requires a team effort, Naomi was forced to take on many roles. 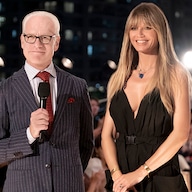 LOL! Tim Gunn Declares He & Heidi Klum Are “the Oddest Couple in Fashion”