Nicole Kidman and Keith Urban have been married for almost 14 years. However, the 52-year-old actress remembers the moment she fell in love with the 52-year-old singer like it was yesterday.

The Oscar winner told the tale for a cover story in WSJ. Magazine’s May issue.

Kidman and Urban met at the G’Day USA gala in 2005. However, it was a later ride on his Harley Davidson throughout Woodstock, New York—followed by a romantic picnic in the woods—that led the country crooner to capture her heart.

“I was a goner—I mean, c’mon.” Kidman recalled to the publication.

Kidman and Urban married in 2006 and welcomed two daughters—Sunday (11) and Faith (9)—over the next few years. She also has two children—Connor Cruise (25) and Isabella Cruise (27)—from her marriage to Tom Cruise. The Days of Thunder co-stars divorced in 2001.

Over the years, fans have watched Kidman and Urban pack on the PDA and celebrate each other’s career achievements. Whether they were attending each other’s award shows or supporting each other at a movie premiere or concert, they’ve always been each other’s biggest fans. 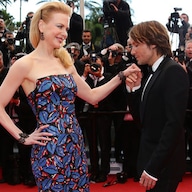