The pains of pregnancy!

Nikki Bella got candid on this week’s episode of The Bellas Podcast, explaining to listeners that she’s been struggling with a particularly aggravating pregnancy side effect: a hemorrhoid.

To be fair, her twin sister Brie Bella was the one who brought it up, asking, “How is your butt doing?”

Brie dismissed her concern, joking that everyone already knows “how scary [her] butthole has been lately.”

“Okay, first of all, I fixed it,” Nikki said. “Secondly, Brie, so what she’s talking about—and you know what, anyone who’s ever been pregnant is gonna feel me on this; at least I hope so—you guys, I got the biggest hemorrhoid. And it sucks.”

Nikki explained that she first started to experience pain while prepping the baby’s nursery with Artem Chigvintsev.

“I went to the bathroom and I was bleeding. Thank god it wasn’t the front—it was the back!” Nikki said. “And I’m like, ‘Oh my gosh. My butt’s bleeding. This is terrible.’ And I woke up the next morning and I had a full, sticking out hemorrhoid!” 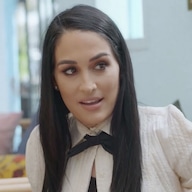