In the second installment of The Voice’s virtual happy hour, the show’s coaches shared their attempts at keeping busy and sane during quarantine, by sipping cocktails and sharing their experiences during self-isolation.

Blake Shelton attempted to TikTok, rolled in flowers and adored some ducklings. Kelly Clarkson cautiously interacted with a horse, gave a lasso a twirl and had a whack at chopping wood. John Legend lamented his loneliness at the piano. And Nick Jonasshared his newfound passion as an over-caffeinated barista.

“I’ve been getting really into latte art,” Jonas explained before slurping a cup of joe. “I’ve been starting with the simpler things like leaves, but I’m working towards a self-portrait.”

“The nice thing about latte art, is, it turns out, I love coffee!” Jonas continued with a red-eyed revelation. “I can’t sleep.”

But perhaps even more entertaining than Jonas’ new obsession was the cameo by his wife, Priyanka Chopra. 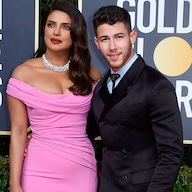