As the world forges ahead with a new normal, so will the 2020 ESPYS.

Since its debut show in 1993, the ESPY Awards have always had a host. This year, that tradition will continue with a twist as there will be not one, but three sports stars running the show: Seattle Storm point guard Sue Bird, OL Reign winger Megan Rapinoe and Seattle Seahawks quarterback Russell Wilson.

While the coronavirus pandemic has caused unforeseen challenges to beloved awards shows, just as the athletes they celebrate, the ESPYS is facing those obstacles head on, “shifting its focus from outstanding athletic achievement to further highlight narratives of service, perseverance, and courage within the world of sports,” according to a press release, while adapting to a new socially distant logistical playbook.

“There is so much good being done in the world right now, and The ESPYS are recognizing a sports community whose achievements reach far beyond the court,” Bird said in a statement. “I’m proud to be hosting this year’s unique show with Megan and Russell, two athletes I admire for their talent, but more importantly, their compassion in today’s world.” 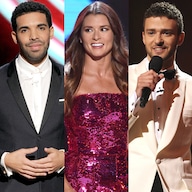 The Best (and Funniest) ESPYS Hosting Moments of All Time