At just four years old, Saint West—Kim Kardashian and Kanye West‘s eldest son—is starting to resemble both of his parents more and more each day. But what’s shocking is just how similar he looks to Kim when she was his age!

The mother of four recently shared side-by-side photos of her as a child and Saint now, and they’re practically identical! She captioned the Instagram Story post, “My twin in every way.”

It doesn’t get more adorable than that.

Check out the photo collage below, along with more photos of North, Chicago and Psalm‘s brother, Saint! 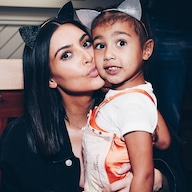