It’s been five years since we said goodbye to the ’60s.

On May 17, 2015, the landmark AMC drama from creator Matthew Weiner, which provided an incisive look at life in America in the turbulent 1960s through the lens of the Sterling Cooper ad agency and its many employees, finally reached the fall of 1970 and the end of its seven-season saga.

And after making Jon Hamm, Elisabeth Moss, January Jones, Christina Hendricks and Kiernan Shipka (to name but a few) household names and stars in their own right, it put a period on the story of Don Draper (not to mention those of his family and colleagues) while suggesting it was his attendance at a meditation class that lead to the iconic 1971 “Hilltop” Coca-Cola commercial. You know, the one with the “I’d Like to Buy the World a Coke” jingle.

In the five years since, the stars of the show have gone on to great things. So, in honor of the finale’s fifth anniversary, we thought we’d check in with them. 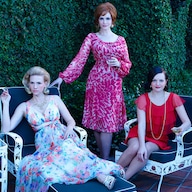 Mad Men Finale: The Stars Pick Their Best and Worst Outfits Ever