Tiffany Haddish isn’t having any of the romance rumors.

On Wednesday, the Girls Trip star hilariously shut down speculation that she’s been dating Common during her virtual visit to TODAY, telling host Hoda Kotb to “get out of my bedroom.”

“He’s on Bumble,” Tiffany, who is a Bumble spokesperson, teased as the mom of two asked to hear more about their recent date on the app, where she and Common highlighted its new virtual dating features. “We went on a virtual Bumble date. Get out of my bedroom, Hoda!” Further proving that she’s single, Tiffany added, “Now it’s just me in my bedroom and all of my clean clothes. I piled all the clean clothes next to me so it feels like somebody’s in the bed.”

During their date, the Grammy winning rapper and comedian appeared to be hitting off as they flirted with one another. Before signing off, Common told Tiffany that he’d “love to see you again” and the two ended their chat by saying “love you” to each other. 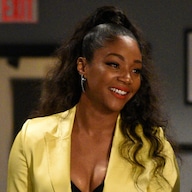