On Thursday, Sofia Carson had a virtual chat with E! News co-host Scott Tweedie on the latter’s Instagram series, HappE! Hour. During this exclusive interview, the Descendants actress opened up about her part in UNICEF USA’s upcoming streaming event, UNICEF Won’t Stop.

According to the Disney darling, she had the honor of interviewing the Breakfast at Tiffany’s star’s granddaughter for the special.

“I have the honor of interviewing my idol’s granddaughter—Audrey Hepburn’s granddaughter—Emma Kathleen Hepburn [Ferrer], who is absolutely incredible,” Sofia gushed to E!. “It was so surreal to speak with her. You know, she’s also dedicated her life to, following in her grandmother’s footsteps, in giving back.” 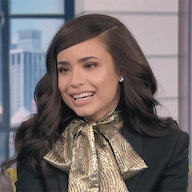