Paws up, little monsters, because we’ve got an anniversary to celebrate!

While our attention has been on the impending release of Lady Gaga‘s forthcoming and highly anticipated new album Chromatica on May 29—and rightfully so, after the frenzy that singles “Stupid Love” and the Ariana Grande-featuring “Rain on Me” have created—May 23 marks a special day in Mother Monster’s career. And that’s because nine years ago, in 2011, it’s when she delivered unto an adoring public her second studio album, the iconic Born This Way.

The album, which saw Gaga expand her dance-pop sounds to incorporate a wider swath of genres, including rock, disco, house and more, was a massive success, selling more than one million copies in its first week. In fact, it had the highest first-week sales for any album in the previous five years. Beginning with its empowering and inclusive title track, the LP spawned four top 10 hits on the Billboard Hot 100 chart, with “Born This Way” going on to become the 1,000 song to reach No. 1 on the chart since its inception in 1958. 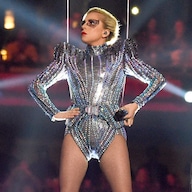 All the Times Lady Gaga Gave Back