Amid nationwide unrest following the death of George Floyd, Thomas Rhett and Lauren Akins have spoken out against racism with their daughters in mind.

On Sunday, the Grammy-nominated country star and his wife of nearly eight years took to social media with statements expressing both their uncertainty with what to say and also their desire to speak up. The couple are parents to three daughters: Willa Gray, 4, who they adopted from Uganda, Ada James, 2, and Lennon Love, 3 months.

“As the father of a black daughter and also two white daughters- I have struggled with what to say today,” the performer began. “We have navigated forms of racism directly and while there is mostly overwhelming support and love for our family, sometimes there is just the opposite. Because of that fear, it can be a lot easier to choose silence, but today I’m choosing to speak.”

Thomas addressed his own experience, writing, “I have no clue what it feels like to be profiled by authorities, treated negatively or have my life threatened because of the color of my skin. When I witnessed the horrific murder of George and think about the mistreatment of other black men and women in America, I am heartbroken and angry.”

He also reflected on his family, noting, “I get scared when I think about my daughters and what kind of world they will be growing up in and how my JOB as a father is to show them how to lead with love in the face of hate. To know their worth and value as not only women but human beings.” 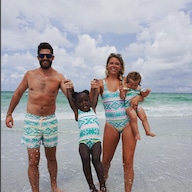