On Saturday morning, Kim took to social media to share an adorable video of Chicago singing a special song to her baby brother, “Rain, rain go away, come again another day, Little Psalmy wants to play, rain, rain, go away.”

In the video, an enamored Psalm looks up at his big sister while she’s singing him his very own song. The mother of four also captioned the video, “Rain Rain Go Away Little Psalmy Wants To Play.”

It’s safe to say that after about a week of consistent and heavy rain in the Los Angeles area, the Keeping Up With the Kardashian star’s children have grown tired of possibly only being allowed to play indoors. So, in times like these, Chicago has turned to song to express how she and her baby brother might be feeling. 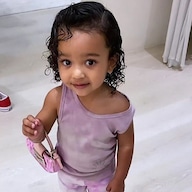