That’s right, Hilary Duff‘s iconic character’s jump to the big screen is officially 17 years old, with the Disney movie debuting on May 2, 2003.

While the film, which followed Lizzie and Gordo (Adam Lambert) as they traveled to Rome for a graduation trip, debuted at No. 2 at the box office, losing the top spot to X2:X-Men United, grossed over $55 million and sealed Lizzie’s spot as the reigning Disney Channel queen.

Hey now, 17 years later, Lizzie (and Duff) are just as beloved as ever, with fans still knowing every word of the movie’s hit song “What Dreams Are Made Of.”

But did you know there was actually supposed to be a sequel that never ended up getting made? Or that Duff faced some serious competition when she first auditioned for the role that made her a household name back in 2001? 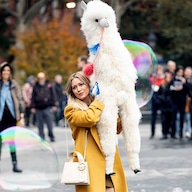 Everything We Know About the New Lizzie McGuire