Once a Clover, always a Clover!

Gabrielle Union gave Bring It On fans some nostalgia during her virtual visit to Good Morning America on Tuesday. Before wrapping up her interview with Robin Roberts, the star treated viewers to a rendition of the film’s now iconic cheer as she reminisced about Bring It On’s 20th anniversary.

“Okay, a little throwback: ‘It’s cold in here…’ Come on,” the news anchor said, hoping Gabrielle would indulge her. Picking up where Robin left off, Gabrielle chimed in, “‘I said there must be some Toros in the atmosphere.'”

Gushing over the 2000 cheerleading flick, Robin said, “Can you believe it’s been 20 years?” to which Gabrielle replied, “The beat still goes on. Oh yeah, it’s the gift that keeps on giving. I think with the success of Cheer on Netflix…but it just keeps bringing it back. And fortunately, unfortunately? The instance surrounding cultural appropriation has stayed completely relevant and it makes the movie relevant.” 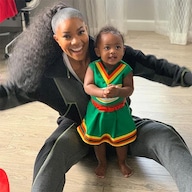