Biles, who turns 23 today, isn’t letting the USA Gymnastics forget about their shortcomings and lack of initiative when it came to investigating Larry Nassar‘s sexual abuse allegations.

The USA Gymnastics took to Twitter to wish the medalist a happy birthday. Sharing one of her many iconic routines on the mat, they wrote, “HAPPY BIRTHDAY to the most decorated gymnast of all time, @simonebiles! We know you will only continue to amaze us and make history.”

To which Biles powerfully replied, “how about you amaze me and do the right thing… have an independent investigation.”

The 23-year-old star is one of several Olympic athletes who have criticized USAG’s proposed $215 million settlement for survivors of Nassar’s sexual abuse and has been publicly calling out USAG and the US Olympic and Paralympic committees for an independent investigation. 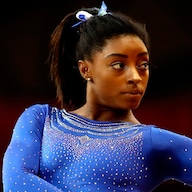 Every Time Simone Biles Was a Total Winner