YouTube star Jake Paul has responded to social media backlash after some alleged he was looting and destroying property during protests in Scottsdale, Arizona.

Last night, Paul and his friends were broadcasting live as they followed protests throughout the area, eventually arriving at the Fashion Square Mall as stores were robbed and demolished.

While Paul is not seen directly participating in any looting or vandalism, he is featured prominently in many videos on social media—and fans expressed their outrage with the YouTuber, saying he was exploiting a social justice movement for his own internet clout.

“Sooooo what about the alcohol you guys looted from @PFChangs? #jakepaulisoverparty,” tweeted another, referencing video recordings circulating the internet that allegedly shows Paul being handed a bottle of vodka as someone exited the burglarized business.

The clip, which has been shared by various accounts, was pulled from Paul’s videographer, Andrew Blue‘s since-deleted Instagram stories. 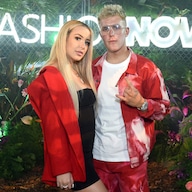