Long before she was a star herself, Zoë Kravitzhad a last name known worldwide.

As the only child of rockstar Lenny Kravitz, the now-31-year-old actress was a celebrity kid before paving a Hollywood career of her own. As she recalled to host Dax Shepard on his Armchair Expert podcast on Monday, she had even tried ditching her famous moniker while in the process of making a name for herself.

“Did you embrace your name or did you run from it?” he asked.

“I thought about not using it,” she said of her last name. Instead, the actress had attempted to go by Zoë Isabella, the latter being her middle name.

“I kind of tried to do it, but it just like didn’t stick. People kept on forgetting,” she explained. “No one was responding to this idea I had. I would tell my agent and it just wasn’t happening.”

Then, there was Lenny’s reaction. 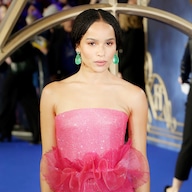